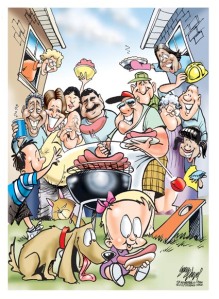 I’m hosting a neighborhood cookout this Saturday. My neighborhood is a small one, with only about 21 houses in it. Getting people to commit to come has been fairly hard. Some sound interested, others actually disinterested.

As I drove out of my neighborhood yesterday afternoon I passed by several houses which I assumed would simply not come. And it made me very angry. I took that anger with me to work out, and it continued until one of my friends at the gym said he was coming to play Paintball this Saturday.

Then I began to realize that God was doing His work whether I realized it or not. By the time I got home, I had forgotten this, and was angry about all of the households which I assumed would not be coming. Amy reminded me that I had done all that I could in personally passing out flyers door to door, and praying. If its just several houses that come, then that’s who God wants to be here. Just one family at a time. Sometimes I want more though.
But I’m thankful for those near neighbors who are coming. And we’ll pour ourselves into the relationships God grants us and get to know them better.