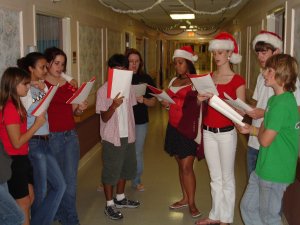 Each year, on the first Sunday of December, our youth group goes caroling. We did this at my last youth group in South Carolina, even though the kids hated it.

Down here its a little different. We actually had two new faces to join us in jubilant song. We don’t do this to make ourselves feel good (even though there is great joy as we sing of Christ in a place which needs to hear him sung), but because God does care about the fatherless/widows/the oppressed (Psalm 68). So we read that verse right before we began practicing the songs.

This year we tried to have a little more interaction than in previous years. We started in the dining hall with several numbers and then did a little “M & M” (Meeting and Mingling). It was a beautiful site to see our youth go out in teams of two’s and three’s (don’t worry they weren’t wearing white shirts, black ties, black paints, backpacks, and elder name tags) and talk with these folks. To a man/woman, the residents were INCREDIBLY thankful we were there.

Afterwards we traveled upstairs and downstairs caroling through the hallway. We would stop after several songs and do some more “M & M.” Once again it was a beautiful site to see youth care for those who have no one.

Amy and I, and a few of the little one’s (that’s why I call the Jr. High’s) went in to a room with lovely lady who had lost her husband and was really struggling. She said that hearing us sing and having us come in and pray with her (our 7th grader offered the prayer-I was stoked about that!) blessed her greatly. Afterwards, since the rest of the group had already moved on, we offered her a special guest performance. It sounded terrible in real time, but in the ears of this lady, it was beautiful.

She claimed that it made her day to know that she was not forgotten. That someone did care. And someone does. Christ our God does care for widows/orphans/oppressed. And that is why caroling at nursing homes will always be a part of our Xmas festivities. When we have kids of our own, we’ll do it again. But until then, I’ll be taking others kids.

I would highly encourage you to grab a small group and go caroling at a nursing home near you. If you can’t sing (meaning you can’t get enough folks-they think anything sounds good!), just go and talk. The activities director will be glad to ‘squeeze you in.’ And like Cheers, “They’re always glad you came.”