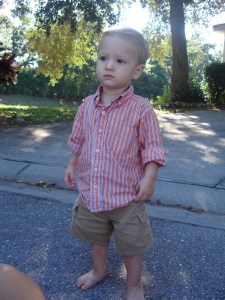 I’m anxious for Connar to talk. Why? I guess so that we can communicate. But when he does talk, he’ll be able to express himself verbally and not simply run around in circles acting excited and making talk-like noises. He’ll be speaking and not expressing himself like we’re accustomed to seeing him express himself. I’ll definitely miss that.

But one of the “words” he spoke last night really got my attention and is to this day the coolest word I’ve heard him speak since “Da.” He had a hard time going down to sleep, so I volunteered to go survey the situation: usually it simply involves picking up his blanket which he regularly throws out of the crib. So I gave him back his “comfort item” (why he throws out his “comfort item” when it does in fact provide him comfort-he can’t sleep without it-I’ll never know), and found out that he simply wanted me to hold him. Definitely a rarity at night. So I did and said some prayers with him.

When I finished and said “Amen” (which is roughly the equivalent of “truly” or “I believe that,” not simply an “I’m done” as we usually mean it), Connar echoed the “Amen” right back. Now it was something like “Mo.” But he’s been doing this immediately following our prayers, so much so, that I think he’s beginning to say “Amen.” That was way cool for me to hear.

How cool of an opportunity parents and all those in the church have (the local church is a cov’t community without “god-parents” b/c we all play a role in raising kids) to teach kids about Jesus…..I hope we all can see it as such.