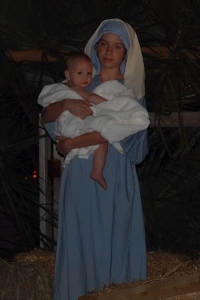 Just about every year for the past 20-25 years or so, my mother has put on a neighborhood Christmas pageant. Now my folks and I have lived in 4 different neighborhoods since the onset of the pageant, so the play has changed a bit over the years. At times, there were animals like sheep and donkeys, and at times there were professional musicians (of course no one could forget my “Silent Night” on electric guitar where I missed every other note). While the central message of the drama doesn’t change, lines have been tweaked and added/subtracted throughout its, and my lifetime (I’m only several years older than the pageant myself).

Last year Connar was baby Jesus, but this year he outgrew the part and my brother’s son Ben starred as the Savior. Having been to nearly 15-20 of them, I routinely notice line changes. The story is always first contextualized with narrators, and then the drama unfolds. And this is the part where I could tell my mother changed some lines up.

Everyone laughed. But it was more than funny. The gospel story was connected with real life, offering real hope, to real problems. It wouldn’t have been nearly as funny with our first neighborhood in South Tampa. Different audience with no strict HOA and different socioeconomic group.

This is a fine example of healthy contextualization. The message doesn’t change, but what parts of the gospel are emphasized (new record, new heart-in this case it was “new heart” and the ability to live at peace in an unstable world-new world, new family……) will and must change to reach different people.

My Mom will be on TV this Wed on CTN at 1 pm to discuss the neighborhood pageants and will have some pictures of the most recent one.