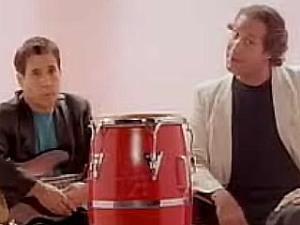 It can’t be easy to be an evangelical Christian on Larry King. He loves to ask the question, “So do you think Jews, or Hindus, or Muslims go to heaven?”

I really don’t get why the answer is so offensive, but maybe it’s just me. I mean I’m not offended if a Muslim thinks I’m going to Hell or will miss out on the whole personal virgins deal, or if a Hindu thinks I’ll be reincarnated as a gnat, or a Buddhist thinks I’ll miss out on Nirvana.

But if someone believes Jesus himself makes an exclusive salvific claim about himself, then the person bearing such news automatically becomes the enemy of all enemies. The reality is that Larry simply wants you to believe His worldview is the correct view, and if you don’t, you won’t be tolerated. But I guess Jesus himself always said they’ll hate you because they hate me and Paul reminded us that Christians are the “smell of death” (II Cor 2:15) to those who don’t believe. So maybe it is me?

Anyhow, sometimes the fear of man, specifically the fear of Larry can be quite scary (I’m not being sarcastic-he is a powerful man in some ways). It can make some of us say things we don’t believe because we want to be approved.

You may want to watch this sad video, from June 2005, where Joel Osteen really caves regarding Jesus’ exclusive claim that He is the only way to heaven. Nevertheless, Osteen recants his statement after the flak he got from those in his camp and his re-watching the video clip.

This video is five years old, but I think its still a great picture of repentance and humility we all must embrace. Under Larry’s lights, in the heat of a moment, I can see how a reforming people-pleaser like Oesteen could under the right (or wrong I guess is a better word) circumstances soften a hard truth. We all could. I’m glad old Joel recanted, because like it or not, he’s got the “ear” of a ton of folks. I don’t like Joel’s (in my opinion) shallow positive feel good theology, but I like his repentance. We can learn something here from both Joel and Al: realize you’re not above softening the truth or above the need for seeking real repentance.