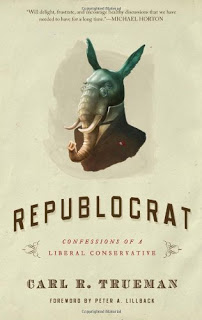 A good friend of mine at Redeemer let me borrow a book he recommended called Republocrat by Carl Trueman. I don’t read a bunch of political books, but this one was definitely worth the read. And it was short, so that always helps me.
While I’m not sure I would ever be buddies with Dr. Trueman (although I have to admit his eclecticism in everything besides worship-he’s an exclusive Psalm singer-does make me want to chat with him some time), his writing style is absolutely marvelous. If you like good writing, albeit a few longer than usual sentences here and there, you’ll at least like his style. It really drew me in; I’m a fan of good writing.
I think Trueman’s main point with Republocrat is to serve as an “outsider” to expose the inconsistencies within both parties, and to challenge the notion that either of them directly come to us from the bible. Since his audience would seem to be “the Right” and “Religious Right,” he spends a good part of his time addressing those who believe Fox News really is “fair and balanced.” Instead he lists examples of how this “fair and balanced” news program, owned by Rupert Murdoch, is driven by money, greed, and an ideology.
I’ve already shared my two cents on how NO ONE is fair and balanced; we all have biases. And that’s OK, just recognize them, and recognize them in your news programs.
The harshest thrust of his criticism seems directed toward Glenn Beck and Bill O’Reiley. Contrary to modern evangelical opinion, these folks aren’t our prophets. Trueman argues that they are regularly logically inconsistent, ignorant, and misguided, and gives some examples why he feels this way.
The tone might (Brits are just different, so this just might be a cultural difference) have been a bit on the harsh side, but it was filled with fun, clever, witty sarcasm. And he blasts both the left and the right.
Overall, I think he leaves the reader with several positive a-political challenges, but here is his strongest point.
Get your news from multiple places, and don’t assume that CNN, MSNBC, or FOXNEWS has a monopoly on what’s “really” happening. Use the mind that God has given you to develop informed opinions.

I definitely recommend this book to both ends of the spectrum: political die-hards or politically indifferent. Not everything he says you or I will agree with (that’s the case with every book but the bible) in regards to political thought. However, in regards to philosophy-how you arrive at your political thought and opinions-I think this read could be incredibly helpful and allow you to enter into healthy dialog with some different folks.

4 thoughts on “Republocrat: more thoughts than a review”