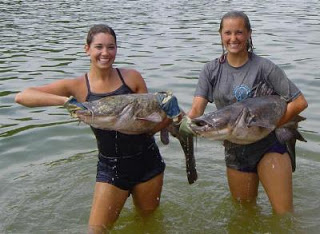 Some folks down in Texas got some good news this week. They could possibly join 17 other States, including neighboring Oklahoma, and be allowed to “noodle.” Noodling is the art-if you want to call wiggling your fingers into a rock pile or submerged structure and waiting for a catfish to bite them art-of catching catfish with your hands. Once the fish bites down on your fingers (again, if I didn’t lose you at catfish, I’m assuming I lost you “bite down on your fingers”), you use your other hand to help wrestle the fish to the surface. And in the end, you have, a catfish.
Some states have “noodling” tournaments and even “noodling” guides and businesses with “resorts” (RV type campers) to house first time catfish angler-wranglers. I’ve seen TV specials where stereotypical working moms from D.C. have actually left family and work for “noodling” vacations.
Of course the reason noodling is illegal in most states is because people die from noodling. Forget the fact that it might not be a good idea go into snake infested waters and stick your hand in a fish’s mouth. Remember the fact that catfish can get big and they don’t like getting wrestled to the surface. People drown. Not the way I would want to go: “I fought the fish and the fish won.”
What possesses a man or woman to noodle? Demons? Probably not, though I don’t rule it out completely. Is it the thrill of catching something with your bare hands? It’s probably more than that-though not necessarily less than that-because serious noodlers describe it as a way of life.
I’m not a noodle insider, historian, groupie, or buff, but have seen a number of noodling specials on TV. One thing I’ve noticed is that people don’t noodle alone. You need someone to come in and pull you to the surface if Mr. Catfish becomes unusually reluctant to give up his spot. I guess you could say noodling begets a community centered around helping and being helped. Or perhaps the need for such a community begets noodling?
With normal fishing, you don’t need anyone. And some people like that. But latent within the “art” of noodling comes a recognition that you need the help of others. You need them and they need you. While I’ll not wiggle my fingers underwater for a catfish to bite them, I can at least see and appreciate that the need for noodling goes beyond primordial hunting. It might be just as much about community than catfish. Maybe.