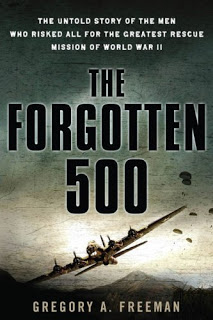 This week I finished reading The Forgotten 500, a book about “the greatest rescue mission” of WW II. More than 500 downed airman who bailed out over the former Yugoslavia were eventually picked up over a period of months. These lads actually had to make a rudimentary airstrip with their bare hands and a few tools, while working at night, praying the Germans didn’t discover their operation. The “odds,” if you will (and I guess I won’t, or at least shouldn’t), were definitely stacked against them. Not one soldier or pilot was lost in this operation. Truly a miracle.
Yet it was a miracle that wasn’t told. And its a shame. Due to the fragile state of post war relations, and the mistakes of the Americans and British backing the communist partisans, the story went largely and intentionally untold and proclaimed. You could feel the sadness of these soldiers not being able to tell their story. After all, what good is good news if you can’t share it?
Still these soldiers fought to tell the story and clear the name of the Serbian general Draza Mihailovich. Despite governmental interference and often times, attempts to keep them quiet, they would not take no for an answer. They could not protect the one whom they owed their freedom from post-war assassination by the communists, but they would see to it that people knew the truth about their savior. Mihailovich saw that these men were provided for and would not give them up to the Germans no matter what retribution occurred. The truth about him must be told.
These fallen airmen truly provide us a great example of evangelism. There will always be opposition, sometimes governmental interference, and situations which seem to seem like closed doors. But these men were bound by the truth and the need to honor their savior. Their gratitude knew no bounds. It had nothing to do with guilt. It had everything to do with a perpetually thankful heart and the honor of someone who would not let the enemy pry them out of his hands.

Thankfulness and the glory of our Savior are probably the best evangelistic motivators, and certainly what sustained them in all of their frustrating “evangelistic” efforts. When others are putting up relational barriers, that sense of “I’m doing this for them because they need Jesus,” will often lead (at least in my experience) to anger at those who do truly need Jesus. But when everything is grounded in Christ, including our motivation for sharing the gospel, we become less angry and more patient with those who seem disinterested or hostile in discussing spiritual matters. Paradoxically, we then become more compelled to share, but freer to relax and thus elude unnecessary frustration.

Even if you’re not a WWII buff, this well written book includes life stories of many of the soldiers and how they providentially collided to in order to provide such a rescue. Worth the read.