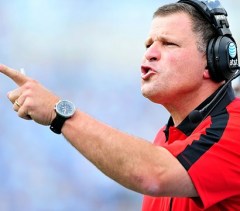 Now the most recent story is his linebacker son at Berkeley Prep getting suspended for the rest of the season. Apparently vulgar language can come from coaches but not from players using such words in anger toward the referees.

According to a FHSAA report obtained by The Tampa Tribune, Schiano was ejected from the Lennard game for using profanity at a referee. The conduct is considered a “Level 2” unsportsmanlike conduct, which carries a six-week suspension.

This is somewhat ironic in that Coach Greg Schiano preaches discipline. According to respected player Ronde Barber, “he even has rules for rules.” But his son was obviously playing by another set of rules.

Here are a few takes:

1.) A son’s behavior, particularly when it swims against the current of his father’s core teachings, reflects poorly on the father. Now it doesn’t mean that the father has done a bad job of instilling discipline. It doesn’t necessarily mean that he is a bad dad-although how one can be a good Dad AND good football coach is either a mystery or impossibility. But it really does dishonor and embarrass the father. When our kids do cuss out refs, or don’t shake hands after games, it really is embarrassing. I think that’s probably OK. But what we do with the embarrassment is where we can get into trouble.

2.) Regardless of the fact that it does embarrass the father (I’m sure I’ve embarrassed my father the same way my son’s tantrums embarrass me) I don’t think my embarrassment can EVER be the reason  why such a behavior is bad. Now for shame based cultures without the gospel, there is nothing wrong with that. That’s normal. Don’t screw up because you bring shame to the father. And if you do, you have to bear that shame somehow through atonement or suicide. But if the gospel reminds us that there is no shame for those in Christ (Romans 8:1), then parents can’t play the, “you embarrassed me” card. God doesn’t do it to us, so we can’t do it our kids.

3.) It’s natural to be embarrassed. But have you ever asked yourself, “Why is this so embarrassing for me?” Often times it is because we lose approval points. We don’t look like we know what we’re doing (which is only an illusion anyway). No one will give us the proverbial “parent of the day” award. And you know you want it. I do, and that’s why my child’s bad behavior is so embarrassing.

4.) While sins affects more than just the person sinning such as the parent, team, or community, the ultimate offended one is God. Schiano may have rules for rules, but God has laid out a perfect design for us to follow. And it is him whom we have offended. David reminds us of this when he says, “Against you, you only have I sinned Lord….”(Psalm 51:4) The sin of cussing out a referee or refusing to shake the other teams hands is not primarily an offense against the ref, the other team, or the coach, but against the Lord.

5.) It doesn’t hurt to read and re-read, and re-hash in our minds the story of the Prodigal Son (Luke 15:11-32). The younger brother, due to his sin and selfishness brings shame to the father. In a shame based culture, this is a bad idea. Bad Idea Jeans for sure. But the father meets the son outside of town, embraces him, and brings him back into town to remind everyone that he is covered. The father covers the sons shame while taking the sons shame upon Himself. How great is it to hear that God is not embarrassed or ashamed to call us his sons, nor is Jesus ashamed to call us his younger brothers (Heb 2:11). I hope I can remember this the next time I’m embarrassed by my son’s actions.