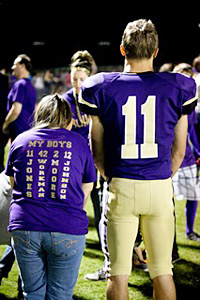 Sometimes athletes, particularly in high school can really be jerks. And sometimes, being a jerk is what they do on a nice day. Yet every so often, one hears (now you can hear-if you hadn’t seen this) of a story where the athletes aren’t the bullies; they are the defenders of the bullied. The story can be found here, and you’ll want to read this one. I know I always say things like that, but this one is a heart warmer. It really is.

A mentally handicapped (microcephaly) gal named Chy was getting made fun of, for guess what, being mentally handicapped. Cue blood boiling…..So her mother resorts to faculty, principal, militia? Nope. She goes to the quarterback of the football team.

Now that Carson Jones agreed to do something about it, he would probably just bully the bullies? Right? Not this Mormon.

He started asking her to eat at the cool kids’ lunch table with him and his teammates. “I just thought that if they saw her with us every day, maybe they’d start treating her better,” Carson says. “Telling on kids would’ve just caused more problems.”

It got better. Starting running back Tucker Workman made sure somebody was walking between classes with Chy. In classes, cornerback Colton Moore made sure she sat in the row right behind the team.

Just step back a second. In some schools, it’s the football players doing the bullying. At Queen Creek, they’re stopping it. And not with fists — with straight-up love for a kid most teenage football players wouldn’t even notice, much less hang out with.

This Carson Jones fellow had been given clout. A QB has clout. He has influence. Instead of using that influence to advance his own agenda, Jones used his clout to see that this young gal was enfolded into the “cool” group. There she could find refuge from the bullying, acceptance, and love. Popularity, clout, influence, in and of itself, is not bad. You can use your clout for good. You can use your clout to advance Jesus’ Kingdom purposes. I think more important than this kid being a QB was this kid simply offering himself in relationship to someone who needed it. When people are in need of relationships, and you choose to offer yourself to those oppressed and hurting, that’s all the clout you need.

If I were the mom, who knows what I would have done? I can’t imagine someone mistreating my child and not ordering the high school equivalent of a “hit,” something like an atomic wedgie, toilet swirly, paintball raid. But this kind of sentiment is only partly correct. We should be outraged and angered at the evils perpetuated through words. And we should fight back. But the question is how? The Taliban blow themselves and others up, but I heard one missionary describe our redemptive activity in the world as “suicide bombers of love.” We fight back with love. We don’t fight fire with fire, but with water.

Not a sappy sort of love which simply laments or votes against injustice, but one which actively moves into the world of the oppressed. Something costly. Bringing those oppressed folks into a new relationship. Our relationships. There is always a cost when it comes to bringing someone into our relationships. Relational dynamics change, and that’s a cost. The cost of taking on the smell (smelly kids/adults tend to have fewer friends), the risk of loss of reputation (will we be as liked when associated with ___?), time, money, convenience etc…

But what about next year, when Carson probably will be on his Mormon mission and all of Chy’s boys will have graduated? Not to worry. Carson has a little brother on the team, Curtis, who’s in Chy’s class. “Mom,” he announced at the dinner table the other night, “I got this.”

Just because something is costly, doesn’t mean that it’s not worth the cost. Jesus instructs us to count the cost (Luke 14:28), but what we get is a joyful treasure (Matthew 13:44). The younger brother saw the cost, but deemed taking care of this gal very much worth the cost. Many times the cost of sacrificial love scares us away from, well, love. But consider the fact that the cost may be worth it. Whether it be as simple as sticking up for the unlovely, or as sublime as adoption, we can’t forget that the blessings of following Jesus do not only start in the life to come (Mark 10:30).