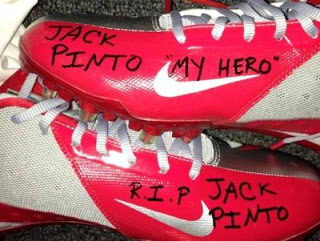 While listening to the Dan Patrick show the other day I heard a more-than-heartwarming story where N.Y. Giants Wide Receiver Victor Cruz visited families and children in Newtown Connecticut. Apparently one of the victims, Jack Pinto, was a very big Victor Cruz fan, so much so that he was buried in a number 80 Giants jersey. Somehow word got out this child loved Cruz and so Victor felt this was a good place to start.

Here are some of my thoughts on the story and interview:

Cruz entered into instead of avoiding suffering

After one of my grandfathers died (and I honestly can’t remember which one), my parents called one of his surviving relatives (I can’t remember the relation either) to inform him about the funeral. But one thing that I will never forget was his response: “I don’t do funerals, they are just too depressing.” To declare that “busch-league” would be the understatement of the year, akin to saying Notre Dame simply lost in the BCS final; it was a massacre. To ignore suffering and death is inhuman, but to intentionally avoid and refuse to death and suffering is truly counter-Christian.

Cruz mentioned that he came to do the best he could to try to bring a little distraction. He didn’t intend to come with words but to come and be a presence.

Jack Pinto was among 20 children who lost their lives Friday in Newtown. Several elementary school-age children played touch football in the front yard of his family’s home on Tuesday. Many wore Giants jerseys or Newtown football or wrestling shirts as they laughed, smiled and hugged.

About 45 minutes later, Cruz left the home in an SUV and an escort of five police cruisers, sirens blaring. He later tweeted that he has “much love to the entire Pinto family. Great people with huge hearts.”

Presence more important than your words

In the interview Cruz told Patrick that he spent time specifically with the Pinto family, so that his stay was about 2 hours. That time included speechlessness and hugging sobbing parents. How hard is that? To be around such sadness and not be able to fix it? Words can’t fix, but a simple presence reminds folks that we know that, even as we wish it weren’t so.

On his drive home he left with a burden that was originally not his own. Now he carried it. He couldn’t simply turn that heaviness on and off.  Now, in some small way it was his. Sadness can stick to you like a b.o. when you enter into the sadness of others, but that is never a good reason to refuse to enter into the sadness of others. Cruz models well the command found in Galatians 6:1, “To carry each others burdens and in this way, fulfill the law of Christ.” Burdens slow you down, and they make you sadder for carrying them. But Jesus says to carry them, so something makes me think He’ll take care of us in that process.

As I watch shows like Parenthood, I see family members making sacrifices all over the place. Whether it be watching kids, picking up the slack at work because another member has cancer or allowing a mother who has fallen on hard times to move in for a season. Why do you do this? The mantra is “It is family, and this is what we do with family.” But what about when its not family? We don’t have any aphorism, or motto for that.

Cruz entered into the sadness of those outside his family. He didn’t have to. He could have ignored this scenario, since they weren’t really a “priority.” It involved going out of his way. That’s another reason why I found this story so compelling, heart-warming, and challenging.

Cruz is know for his salsa touchdown dance, but I will know him more for his modeling.  He mentioned faith in God, and that it would be hard to let his one year old daughter out of his sight. But that he would have to do so one day. I don’t know what kind of grasp Cruz has of the gospel; I couldn’t tell from the short interview, and I missed the first part. But in looking at his example of entering into suffering, suffering that could easily have been avoided, I wouldn’t hesitate to say that he certainly models a gospel response I would hope all Christians (including myself) have with their neighbors.

For the Christian, Jesus entered into our suffering, by suffering himself, for us, who are responsible for the suffering here on Earth. He didn’t just come and lament with us, he suffered because of us, and on our behalf, to redeem us and purchase us out of hopeless suffering. Now we suffer but we do so with the hope, power, and joy, of a suffering servant (for-the time), but now ruling and conquering King. He himself is our motivation.

Yet we should never neglect the power of seeing the gospel modeled before us. Just as seeing people temporarily get pleasure out of doing things they shouldn’t do can tempt us to follow, so can the reverse be true. Seeing other folks entering into suffering can “tempt” us to follow their godly examples.

I know that Cruz wanted to honor Jack Pinto by winning that next game against the Ravens (they lost), but as is usual, what athletes do off the field has much more impact than them winning games or playing well.