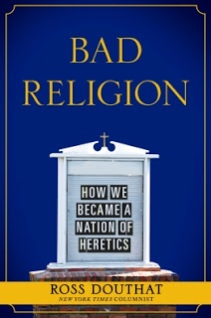 It took me a good long while to finally make it through Russ Douthat’s Bad Religion. But that was only because I read the book in small segments, at night, and in between football games, Parenthood, and Downton Abbey. I’m glad I read it and I’m glad I read it so slowly. One probably shouldn’t read anything in the religio-sociological category too quickly. At least not someone with a mind like mine.

Bad Religion chronicles America’s descent into various heresies. Douthat argues the problem is not that we have become a nation of apostates, abandoning all sense of religions conviction, but in essence that we have become a nation of heretics (of course the latter you can get from his title). Many have reviewed the book, and they are much smarter, more well read, and probably better than me in a number of areas, so I’ll just let their reviews stand.

Instead I’ll briefly offer you my “take” (as opposed to a review); I obviously listen to too much sportstalk. Better than simple positive self-talk as Douthat highlights in his chapter “The God-Within.” What I found most helpful and devotional as I read this well written book was his premise that most heresies have one major starting point and commonality. He writes:

The great Christian heresies vary wildly in their theological substance, but almost all have in common a desire to resolve Christianity’s contradictions, untie its knotty paradoxes, and produce a clearer and more coherent faith. Heretics are often stereotyped as wild mystics, but they’re just as likely to be problems solvers and logic choppers, well-intentioned seekers after a more reasonable version of Christian faith than orthodoxy supplies. They tend to see themselves, not irrationally, as rescuers rather than enemies of Christianity-saving the faith from self-contradiction and cultural irrelevance.

After this insightful introduction (this does sound like a review now….) Douthat sketches out how Christianity struggled and thrived in the American Post WWII era, in both its good and bad forms. Beginning with our unique religious history, Christian movements and counter-movements, he lays the foundation and common philosophies which inspired the specific heresies of our present day.

Among them he discusses, the “Lost Gospels” and their effects (as well as their proponents’ underlying presuppositions), the health-and-wealth prosperity “gospel,” the “God Within,” and the Nationalistic heresy. All chapters are thoroughly researched, gracious, and come from an Orthdox Christian position. Douthat after all, is an orthodox Catholic but clearly sees God’s Spirit at work in traditions and camps far different than his own. That is, unless they cross over into heresy by seeking to flatten the orthodox paradoxes.

This paragraph was worth the price of the book. In response to scholars attempting to nail down a monolithic picture of Jesus, Douthat writes:

But for all the superficial diversity of these portraits, their intellectual method and their theological conclusions, they are remarkably similar. The method is almost always heresy’s either/or, rejecting any attempt to resolve contradictions or honor paradoxes in favor of a ruthless narrowing designed to make the character of Jesus more consistent, even if this achievement comes  at the expense of the tensions that make him fascinating. Either Jesus was divine or he was human. Either he was compassionate toward sinners or he preached a rigorous sexual morality. Either he preached in parables or he engaged in longer theological discourses. Either “all apocalyptic elements should be expunged from the Christian agenda,” as Funk puts it, or else Jesus should be understood exclusively as an end times prophet.

Jesus is much more robust than any one particular picture. In other words He is too robust to say, “He is only like this.” He just won’t fit on any canvas we create. Any image we draw in our mind is just too inadequate-wonder why we aren’t supposed to create images of Him? So if any one political party, person, group, can say my Jesus is only like this (masculine/tough, gentle/gracious, pro-Republican/Democrat agenda, pro-family/anti-family), graciously critique them. They’ve rejected the beautiful, wonderful, and often paradoxical picture of our Conquering King/Slain Lamb Savior in whom we alone can boast. In his place they have instead erected an understandable, reasonable, preferable, tame idol. Next stop is heresy.

Try to flatten the paradoxes and you’ll be on soon on your way to unorthodoxy. Celebrate the tension and you’ll soon find yourself before the throne of grace, filled with awe, wonder, and joy.