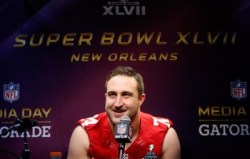 San Francisco Offensive Tackle Joe Staley wasn’t always an offensive tackle. He was one of the players who tried to avoid getting tackled, after he caught the ball. In high school he played wide receiver.

But everything changed in college.

I started out as a skinny 200 pound wide receiver coming out of high school,” Staley said. “I was a sprinter and all of that stuff. I was really fast. I ran a 21 in the 200. Then I got fat. I went to college. Brian Kelly came in my sophomore year. Played tight end my freshman year in college. Brian Kelly came in and said ‘We do not use tight ends in our offense but we want to keep you on the field in some way. We are going to move you to tackle.’ I cried my eyes out. I am not afraid to admit it. Almost transferred but then stayed, gained weight, busted my butt and got drafted.

He was a first round draft pick and is now playing a prized position Left Tackle, in the Super Bowl. Not exactly how he would have “drawn it up,” but I don’t see him having any problems with the “script.” Here are a few thoughts.

1.) Sometimes, or rather quite often, the scripts that are written for us by God are far different than the scripts we draw up for ourselves. But they are always better. Not better in a more lucrative, more high profile way (although they may be sometimes like this one), but better in a redemptive way. God will always make the script redemptive, and He will do it in at least two ways. First of all, He is redeeming you from the power of sin and using your situation in unique ways, which may not (I can’t prove this part but I think its true) be the case in a different situation. But secondly, and sometimes this is actually easier to see, your script is redemptive for others. This perspective is more easily forgotten.

In II Cor 1:3-11, Paul explains that his affliction (not the way he would write his script if he had a say), opens the door for God’s comfort, which can be experienced in all situations. But his afflictions and the comfort which follow has become part of Paul’s script SO THAT others can be comforted. The script God writes for individuals is not only for individuals but FOR OTHERS. My depression, and back surgery at young age, were/are intended not only for my comfort and redemption/sanctification but for the comfort, redemption/sanctification of others.

I’m aware of individuals coming to faith simply because of the affliction/comfort of another. Affliction/comfort is evangelistic at times. Our scripts aren’t over. We know the end. We just don’t know the middle, but we know that God has our good-and the good of others through us-in mind more than Brian Kelly had Joe Staley’s best interests in mind.

2.) Transition from the front to behind-the-scenes. No position in football is less glamorous then offensive lineman. They are usually fat, wear knee braces, and no one knows their names unless they give up a sack or get a penalty. No position is more glamorous then wide receiver. Running backs don’t last that long. Receivers get more miles, and thus more publicity, and contract extensions. Yet few positions are more important than offensive lineman. They can make QB’s and running backs look good. They can make wide receivers look good because they give them time to get open.

Sometimes public spiritual gifts are more valued today, as they were in Corinth. Preaching is important, but without evangelists bringing folks, who would there be to preach? To go from a public ministry like leading a bible study to something more behind-the-scenes can be tough. I love this honesty.

I cried my eyes out. I am not afraid to admit it. Almost transferred but then stayed…

It was hard. He cried. He almost left. I wish there were more “almost’s” in churches today instead of the quick flight to somewhere else that “truly appreciates me and my gifts.”

Now this transition may just be for a season. There may be new opportunities and gift development. Or it may be for a career (like Joe Staley). But remember behind-the-scenes-gifts are every bit as important.

3.) Gifts are best discovered and developed in community. It took someone else to recognize that Joe Staley wasn’t going to be a productive wide receiver at the college level. It wasn’t Joe. He wouldn’t have made that choice. Spiritual gifts inventory tests can be quite helpful. But they are no substitute for asking someone, “Where do you see me best serving and being used?” Other people are fallible. But so are you and I. The more folks involved in discerning spiritual gifts, the less fallibility (as a general rule).

I’ve never been a fan of Brian Kelly. But I’m thankful, as I’m sure Joe is, that he loved Joe (or perhaps the success of his offense) enough to tell him the truth and get the most out of his gifting.