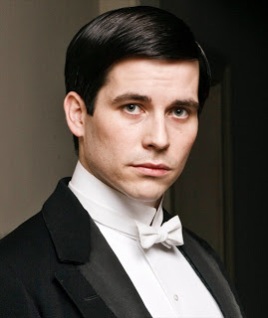 Downton Abbey season 3 has ended some time ago and I’m now beginning to wonder whether or not Duck Dynasty will end up taking its place. I almost feel anachronistic blogging about it, as though I’m writing about “that movie” that just came out called Star Wars. Will it rebound and once again charm the nation across the pond or will it go the way of the Titanic? Regardless of whether or not season 4 will be worth watching, one thing the bloody season finale cannot take away are the number of fantastic illustrations Downton which preceded it. One of my personal favorites came from my least favorite person on the show: Thomas.

Always the schemer (reminds me a bit of Genesis’ account of Jacob I guess in that regard), Thomas hatches a plan to that will get him really rich, really quickly. He soon realizes after the War, that if he buys up all kinds of cooking supplies, Downton will, ironically, then be dependent upon this servant. Apparently a black market deal, with a man who only met in some shady place, is exactly what he’s been waiting for.

After stockpiling his goods, he offers the head cook a chance to give them a test run. The cake or sufflet or truffles or corn-dogs (I can’t remember which one) doesn’t turn out the way its supposed to. We now know from Papa Johns that better ingredients means better tasting pizza, or better tasting anything for that matter. And the reverse is also true. Bad tasting ingredients make for bad tasting cake or corn-dogs.

Figuring that the flour or sugar might have been spoiled, Thomas goes to his warehouse only to find his worst nightmare has come true. When opens the sack of flour, or sugar, or sack of whatever, he finds that it is instead a sack of just white plain stuff. It is not what he spent every last dime of his money on. He’s been tricked. This mystery con-man didn’t deliver the goods he promised.

Thomas’ desperate moment of truth was worth the price of admission. Well at least for me.

This is simply a wonderful portrayal of Satan’s deceptive work. Thomas, like his name-sake in the gospels, actually should have doubted this time. But like Adam and Eve, he got duped.

Sin is so often disguised as something profitable, that is worth the payout, worth the risk. And for a season it can deceive. But it never delivers. In the end, all we are left with is worthless ingredients that can’t even make a tasty corn-dog (and that’s saying something.)

Sin promises the world, but in the end has nothing to offer. It dupes. It cheats us. It leaves us empty and disappointed and yet we come running back to the same place and say, “What else do you have that I can waste my money, time, life, and hurt my relationships with?” Pretty nuts.

Unfortunately for Thomas, he wasn’t broken and just went to back to “business” and schemed his way back into servant-hood. Let’s not waste our sin but come back to the one died for people who regularly get taken to the cleaners on bad “business” deals.