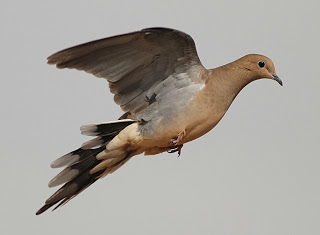 This weekend a bird flew into our garage. That’s OK with me. I’m happy for birds to come and go as they please. As long as they go. But this one stayed for a while. Both garage doors were up, but he kept flying around in circles and continued to come back to where the garage doors lay when they are in the up position. It didn’t make sense. He kept trying and trying and trying, but would not fly low enough to go free. And then he just gave up. After I discerned him to be out of the garage, he showed up again the next day when the property appraiser showed up (I’m assuming wildlife ups the home value a bit, right?). Again he did the same thing. It flew around in a circle, but never low enough to actually fly out of the garage. He was stuck yet again.

Then the property appraiser led me to the real identity of the bird. What I had thought was a pigeon was in fact a dove. And then it all made sense. I confess I don’t know much about doves, but the word on the street is that they fly erratically. They don’t fly straight, but are pretty much all over the place. Silly and senseless. They don’t go from here to there, but from here to there and then back to here. This bird ended up going nowhere, flying all over the place, but never to the right place (the huge opening), and so ended up in the wrong place.

It reminded me of the story of Jonah, at least a little bit.

Jonah’s name means “dove.” That’s no accident. Jonah is all over the place. He heads to Spain but ends up near northern Iraq, the very place he was trying to avoid. In some ways, Jonah was like that bird. Even though he may have sensed and tasted some sort of faux freedom, all he was ultimately doing was flying all over the garage. It seemed like freedom but in the end, it was slavery.

I really wanted this bird to experience the freedom a bird should experience. The freedom that a bird is created for: to fly in the sky. Birds aren’t made for garages. But this bird just didn’t get it. Just like Jonah. And it kind of made me sad (I’m not a dove hunter). Freedom awaited it, but freedom it refused. It wasn’t a free bird. Just like Jonah.

Freedom for the bird is flying where it has been created to go. Freedom for man/woman is not absent of restraint but presence of opportunity. Now that’s not all that freedom is, but I think that’s the part that James brings to the conversation.

But whoever looks intently into the perfect law that gives freedom, and continues in it—not forgetting what they have heard, but doing it—they will be blessed in what they do.

Properly understood in the context of belief in the gospel, the law offers freedom, not slavery. Slavery is flying around senseless in a garage like a dove, but freedom is following Jesus experiencing the life he designed for us.

And it was also a good reminder to consider non-Christians like doves trapped in a garage. While not dismissing their culpability, I should be quick to remember how sorry I felt for this silly and senseless bird. Many people are flying around in circles going nowhere, not tasting true freedom. May we be saddened before we become angry with them. Sadness leads to prayer and moving towards them in love. Anger leads to judgment and separation.