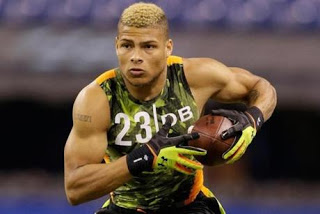 One intriguing prospect is former Heisman candidate Tyrann Matthieu, known to many, and especially to play-by-play man Brent Musberger, as “The Honey Badger.”

Jim Rome interviewed The Honey Badger and I missed it. But as fascinating as a Jim Rome interview is, his reflection on the interview isn’t too shabby. And I did catch that. Apparently Matthieu sounded quite sincere, though as many pointed out, so did Ryan Leaf several months before he got busted for breaking and entering someone’s house looking for drugs. Still, Rome wasn’t exactly sure how to think about Tyrann Matthieu. This was the same guy who failed multiple (and that’s probably not fair to the word “multiple”) drug tests. And at times, just didn’t seem to care about football.

Would he care about “the cron” (marijuana for those who aren’t as hip and down with the times) or would he care about football? Which would it be? Finally Rome pointed out a very simple and biblical truth: he would follow whatever he was most passionate about. If football was a greater passion, he wouldn’t puff the magic dragon (maybe a little more apropos marijuana allusion). If football was his sole and utmost passion, he would have no problem with the weed, pot, reefer, hippy lettuce, etc…

In other words, he needed to replace his less worthy passion with a passion of much greater worth. His passion would drive him toward good things like practice and away from bad things like drugs.

I’ve never heard Jim Rome sound so much like Thomas Chalmers, who spoke of “the expulsive power of a new affection.” Passion, affection, pretty much the same principle. You can’t change a habit or any sin pattern (for any lasting period) in life simply by inserting rules or will-power; instead what we need is a redirecting of your passions/affections. When someone is willing to repent of a less worthy passion, it can then be replaced by a greater passion.

If I were convinced (which I’m not-but then again, I’ve seen former Buc’s defensive back Tanard Jackson for the Bucs go back again and again to the weed, and even did so after being suspended a year, getting another chance, and doing it again when he played for another team) that Matthieu indeed had replaced that lesser passion, I’d draft him.

Fortunately there is a place for those of us like the The Honey Badger. In local churches, people of misplaced passions who chase after pleasure, comfort, power, or drugs, gather and fight for the only solution to their problems: Jesus. In Jesus they find not only forgiveness, but someone who is worthy of our passion throughout the week. They find Someone whom they can think about and in whom t they can delight. In Him there is not only gracious pardon but life transforming power.

Matthieu’s problem is one of passion. We can all relate.