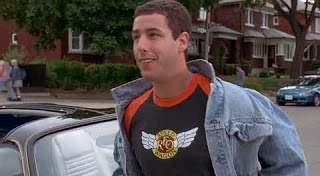 I finally made it down to Bradenton, FL this past week. Instead of driving straight home, I went out of the way a bit in order to see some friends I hadn’t seen in a long time. In fact, for some it had been around 10 years since I had chatted with them in person.

I had some time in the car to contemplate, so here are some of my thoughts.

The Refreshing freedom of dispensablity

When Billy Madison returned to his high school, some 10 or so years later, he found he had soon been forgotten. At first, for him, it had been a downer. No one spoke about him anymore. I returned to Clinton in 2004 (I left in 2002), after I got married, so my former youth could meet Amy. And to prove to them that I did, actually, get married. Friends in the area still spoke about things I did and started in Clinton. Good things. But when I returned this time in 2013, 11 years after leaving for seminary, it was completely different. A deacon thought I was a visitor. Now of course others recognized me, but things were different. The little kids were big. Really big. And old. And to quote Fleetwod Mac, “And I’m getting older still…” They had a new youth leader, and I had little to no impact in their lives. But just like Billy Madison, the fact that I wasn’t remember or involved anymore, provided some catharsis. I moved on, they moved on, but Jesus didn’t. He was still committed to this small town church. It was bigger than I remembered it, having waxed and waned and waxed some more. Wax on, wax off, wax on.

There was a different pastor and different staff. And the church was moving forward in preaching the gospel. It didn’t need me; and my dispensability, instead of making me sad, refreshed my soul. The only thing tangible I can point to in Clinton, SC of my three years “in office” is a flavor from the Tropic Delite shaved ice stand called “Woodrow” (a flavor I lobbied for named after our street). After reconnecting with Charlene the owner, and getting a shaved ice “on the house,” I eased on down the road and headed on. And so did the city. And so did Jesus’ church. It didn’t need me, nor was it dependent upon anyone for that matter. Thankfully.