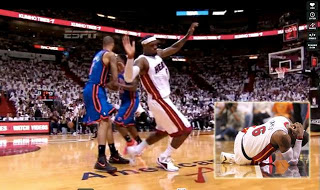 The N.B.A. technically stands for National Basketball Association. Of course over the years it has also stood for other things like “Nothing But Actors.” But this year, particularly during the playoffs it will not stand for acting any longer. Even bigger named (and even bigger whining) players like Lebron James have been fined $5,000 for “flopping.” Soccer players have done this for years and it drives me nuts, but the NBA, is attempting to do something about it. Now I know taking $5,000 from Lebron is like taking away a napkin from the “rest of us,” but it’s a start. I think.

Flopping can give one player quite an advantage over his opponent. By faking or exaggerating the result of contact, he can get the ball back and cause his opponent to be called for a foul at the same time. It’s better than a simple turnover. And it often times works, until now, supposedly.

But it is completely disingenuous and harms the integrity of the game (though I rarely watch NBA so this is more of a hypothetical for me).

Sometimes I think Christians are guilty of spiritual flopping, over-reacting and even acting at times. There is always going to be contact in basketball. That’s part of the game. There is always going to be contact in a church (at least in a healthy church where people spend time with one another!). And just like in a basketball we will bump into each other; often times that contact is simply like two guys going for a rebound, or “boxing out” or “posting up.” It is just part of the game. Feelings will eventually get hurt-how could they not when you put a bunch of broken idiots together in a room? I’m not excusing sin or insensitivity, just reminding us not to be surprised when it happens.

Of course there are “fouls” and even “flagrant fouls” which need to be addressed. But I wonder how many Christians simply “flop,” and act as if they’ve been hit with a vicious elbow to the head when in reality they ran into a pick? Particularly when it comes down to players who have a “history.”

Some have been “flagrantly fouled” a time or too and so it is legitimately hard to trust again. But for others, flopping might be more commonplace and have developed into a life long habit. I know I’ve flopped a time or too along the way, reacting as though someone had thrown a cheap shot my way. In reality, that wasn’t the intent at all. We’ve all flopped, and then moped-though some of us do so more privately or in the privacy of house and home. If there’s one thing we can learn from the NBA it is that flopping, which is ultimately disingenuous over-reacting and at times acting to gain an advantage over another, distracts us away from the real work going on inside and outside the four walls of a church.