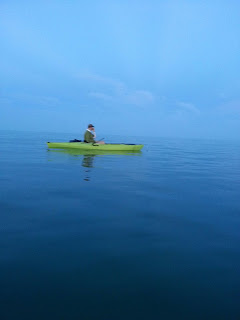 Today a good friend of mine took me fishing off the beach for tarpon. If you’re not familiar with the tarpon, it is a large fish regularly exceeding lengths of 6 feet and weights of over 100 lbs. They are quite difficult to catch and to make things even more challenging, my friend uses a fly rod and I throw a lure.

I had only fished for tarpon off the beach in kayak once, previously with my same friend last summer. But during that excursion, he provided the rod, reel, leader, and lure. He even provided the kayak!

But since I actually live in Bradenton again, there is no reason why I couldn’t bring the kayak, and the gear needed to tackle such a foe. While I had the kayaks, which had been spent the previous three and a half years in hibernation, I did not have all of the “pieces” in place. And I knew it.

I had some of the pieces. I had a rod which could possibly handle a tarpon, at least for a few minutes (25 min is minimum to bring one in). I had the same kind of lure I had caught tarpon on when growing up fishing Tampa Bay. But tarpon have very rough mouths and so one needs at least 3-4 feet of 60-80 lb test leader line tied directly to the lure.

The only thing I had in my tackle box was 30 lb line, useful for snook. So I went with several feet of that. Why not? I didn’t expect to catch anything. I expected to see my friend catch one.

After we spotted some fish, my friend said, “You cast on these fish. I don’t have as good an angle.”

So I did, guessing where they would be heading since we had seen them roll at the surface a minute prior. Then the unthinkable happened. As I was bringing in my lure, one of these fish hit and immediately broke the line. I saw the bath tub sized swirl on top of the water and that was it.

Your goal, or at least your first goal, is to see them jump. After that, everything is a plus. I didn’t even get to feel the rod bend because the line was broken before that even happened.

The culprit: 30 lb line. My buddy thinks the lure was tied on wrong. Perhaps he was right-though I don’t think so! Regardless, I wasn’t prepared for success. I honestly thought I needed live bait to get a bite (that’s a confession and first sign of repentance from a fishing lure “purist.”)

Why this fishing story? Because as soon as I lost that fish today, I immediately thought about this church plant. I had not expected to get a fish, but rather to see my friend “jump” a fish. That would have been almost as fun. But because I hadn’t expected to catch a tarpon, I didn’t go to the store and simply buy some 60-80 lb leader. Nor did I ask my friend, who actually had some with him. As I write this, I’m quite saddened I didn’t ask him for some. Who knows I may still be hooked up on the same fish?

What happens if this church plant actually “works?” I mean, what if people come to it (since that’s what we’re praying for)? I don’t want to be caught using 30 lb line when there’s a possibility of a 100 lb tarpon. If people do come, and come quickly, then it is important to have things in place.

How will we disciple people and move them toward spiritual maturity? What does a growing disciple look like? Why will we worship the way we do? How can someone get plugged in to the church? What areas can they serve in the church and in the community? Will there be enough community group bible studies in which to plug them in? What’s the next step after someone, or rather a number of someone’s come? What’s the step after that? What happens if the proverbial tarpon actually hits?

People sometimes ask, “When will you start your church?” I tell them we don’t even have a building yet to meet (though I have had an offer and a good idea where we’ll meet). And that’s a fine question. An established church meets weekly to worship. But there is much preparation that takes place in order to make sure the church is “ready to launch.” We will start it, but like tarpon fishing in a kayak, we need to be prepared for the event that we actually “catch” one.

So in the mean time, we’ll gather people this summer who have any interest in this church, get to know each other, study God’s word, lay down some principles, specifics, and a vision of a gospel driven, maturing, missional, multiplying, worshiping community that blesses the West Bradenton area. I can’t wait. But just as there is joy the night before rigging rods, checking knots, lures (at least for me), there is joy in the preparation and in the dreaming stages too (perhaps why I never sleep well before a 6am fishing trip).

I don’t know that you can ever be completely ready for a church to start more than you can truly be ready for a 100 lb fish to strike your lure and just about rip the rod out of your hands. But you can be prepared. And I’ll/we’ll do our best to be prepared for both.

2 thoughts on “Lessons from Lost Tarpon: What happens when they actually bite?”