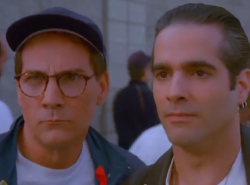 A week ago, while worshiping at Cornerstone, I heard a succinct sermon on prayer from the Sermon on the Mount. It was quite a helpful little sermon that pointed out a few practical oft overlooked mechanics of prayer.

Prayers in public don’t have to long. This is hard for Reformed folks. I think it might be hard for Charismatic folks as well. I think. Have you ever had a moment when you felt really “unspiritual?” Or I guess a better term might be simply “spiritually immature.” I’ve had a ton of them, so it wouldn’t be a great idea to rank them: not a great use of my time. But one in which would probably slide into my top 10 occurred after Sinclair Ferguson opened up his systematic theology class at 8 am with a 10 minute prayer. One guy came up to me and said, “Wow, how about that prayer. So…?” I filled in the blank with the obvious, “So long!” He replied, “No, so rich!”

I felt pretty low then. And perhaps I should have followed along better. But is longer necessarily better? The pastor indicated he thinks Jesus didn’t think so. When people have a lot to pray about, it’s hard to pack a ton in a public prayer. But remember longer isn’t better. Something to consider when praying with your kids or at your church.

Which brings me to the next point he brought out.

“You talking to me?”

To whom are you talking in prayer? Or better yet, who do you want to hear you? Sometimes prayers can really be more like talking to people, as though they are your primary audience.

One of the ways you can know if you consider prayer as though you’re talking more to people, rather than to God, is how scared you are to pray in public. By public, I don’t mean 20 or more people. I’m talking groups of 3-4 folks. If prayer is talking to God, then it doesn’t matter how silly you sound to others. After all, prayer from God’s saints (all Christians) is like a redolent fragrance. Like corporate singing, it is not the sound of the words, but from whence the words come: the contrite, yet joyful heart.

Many of us at various times have forgotten who our primary audience really is. I did too when in seminary, as I rarely volunteered to pray in front of a large number of future pastors. We’ve all forgotten this timely truth from time to time.

Here’s an illustration I’ve been thinking about lately. Have you ever waited in line for some event, or to check out of a department or grocery store, and had someone talk to you just a little bit louder than needed? Or maybe you’ve heard someone talking to his spouse or son or friend, and they are clearly intending for you to “overhear” the conversation. The person has a primary audience, but he also has a secondary audience. It is clear, due to his volume, word choice, that he wants to bring you into the conversation.

Now often this can be quite annoying because you don’t want to be brought in or you don’t want others to be brought in. Or it can be annoying because the person might be talking to you, but their primary audience is actually another person or group “over-hearing.” You can tell this because you’ve already heard what he has said before. The secondary audience has become the primary.

But if the speaker truly is engaged with his primary audience (spouse, son, friend), he can honestly “over-speak” to others he doesn’t know, drawing them into the conversation.

I think this is what can happen in group prayer settings. God is our primary audience and so how eloquently we speak is inconsequential. But how we speak still matters. We speak loudly, intentionally, and with words our secondary audience can understand. They “over-hear” our conversation with God, and thus are intentionally brought into that conversation.

Considering our audiences frees us from the fear of sounding silly, and in addition, it frees us to love and lead people well.