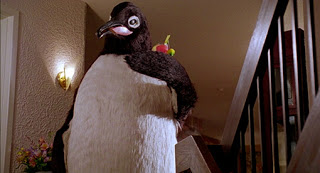 I have two boys who love the bible stories. I have one who really loves one bible story more than any others. My almost three year old Cade can’t get enough of David vs Goliath. Most of the time, it’s the only one he wants to hear. He rehashes the story over and over. Of course, he pretends to be David (I guess that’s better on a number of levels than pretending to be Goliath). And I can see why. He’s a little guy for his age, and he, like all of us, wants to be the winner of the story.

Last night Cade set up a giant stuffed animal penguin (though not quite as big as the penguin in Billy Madison), and pretended it was Goliath. He of course struck him down down dead. Thankfully he didn’t decapitate it, because that could have been costly as well as messy.

Cade’s impersonation is cute. Once again, he’s a little guy.

But when he gets older, would it be good to let him continue to think of himself as David?

In Cade’s Toddler Bible he has begun to notice certain people. Who are those guys Daddy?

Those are the God’s people, scared to death.

No one can face this giant.

The point of the story is not that you or I can rise up and be that brave person and beat our own personal demons, Goliath’s, or El Guapo’s in our lives for that matter. The point is that God HAD to send a representative, who would become King, who would do battle for us. If we are on this brave King’s side, then we are on the right side. That was the message to those who first read the story. Get on David’s side (Davidic line of kings). But of course, the story doesn’t end there.

Jesus, the brave King, also born in Bethlehem, said “I will fight” for God’s people in order to deliver them. I will be their representative. I will not let this cup pass from me.

Our representative had his shot and blew it in the Garden (Romans 5). Yet Jesus does exactly what David did, but this time on a cosmic scale.


If we would begin to find ourselves as the army which was too scared and faithless to fight, we would begin to see Jesus more clearly in our lives. He is the one who fought for us while we were not only scared and faithless, but while we were yet enemies (Romans 5:8). Instead of trying to muster up the courage we may never have, it’s much more freeing to see how Jesus points us to David. And if that is so, we don’t stand up and lead a bunch of other people who simply can’t get their stuff together. We humbly get in line behind a conquering Savior and point people to Him. There’s plenty of adventure in following Jesus (a la Steven Curtis Chapman) because we can’t see the end of the story except through faith.
If Cade wants to dress up like David for Halloween, I’m OK with that. After all, my five year old already has some sense that David did “big sins” and Jesus is the real hero of the story. So it may not be too long….

But in the end, let’s not forget those scared Israelites waiting for someone to “step up” and deliver them. That’s us. Not a very glamorous start but the end sure is.

Here’s a video of Cade Vs the Goliath Penguin