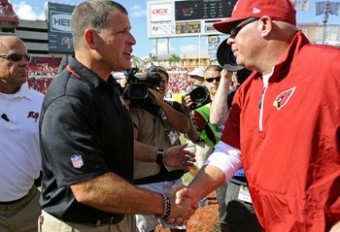 If you haven’t followed the Bucs this year as a fan, consider yourselves, “lucky,” or perhaps a more Calvinistic expression is apropos: “Providentially blessed.” It’s an absolute circus. A tough and reasonably (people have good reasons) disliked coach named Greg Schiano, who actually was featured in the Sports Spectrum magazine volume which I wrote devotionals for a number of years back. So yes, as much as I want the guy fired, and really don’t see the same Christian character we saw in Dungy, we will be forever linked together in the minds of the vast Sports Spectrum readership across the globe. A quarterback, once considered good for a season, has recently found himself out of the picture. Literally, he overslept and missed the team picture and has now been relegated to watching the game in the “inactive” suite. As we speak he is in stage 1 of some substance abuse program, because in his words, he tested positive for riddalin when he only had a prescription for Aderall. Maybe someone confuses Tylenol for Advil, but that sounds to me a bit silly and missing a bit of info if not truth.

The team has lost 3 games by 3 points or less, one on a penalty, another on missed field goal, and the third because of Napoleon Quarterback’s bonehead interception at the end of the game. I guess things could get worse, and probably will. The Lions 0-16 team will be watching anxiously for this team to descend to such a level.

As much as I want to rid myself of all Buccaneers’ association, I just can’t. They are a mess, but I’m still connected to them because they are my team. They are in some sense my mess, because I live in the area.

The church in Corinth was a mess. It was the Tampa Bay Bucs of churches. Bad, probably Schiano style micro-managing leadership. Locker room factions saying, “I follow Paul, I follow Apollos.” Then the super spiritual, overly proud non-denominational guy, said, “I follow Jesus.” People sleeping with in-laws. “Super-apostles” comparing themselves with Paul and finding themselves better, and then getting people to follow? Folks thinking that their gifts were better than the giftings of others. Dudes getting drunk at communion and then eventually “falling asleep,” and I’m not talking about passing out.

Yet, in all of the mess and dysfunction caused by sin, Paul has the chutzpah-I guess you could call it that-to address these jokers as “saints.”

To the church of God that is in Corinth, to those sanctified in Christ Jesus, called to be saints together with all those who in every place call upon the name of our Lord Jesus Christ, both their Lord and ours (I Cor 1:2)

Jesus must have done something to make the Tampa Bay Bucs of ancient churches “saints.” They were saints not based upon what they did (duh!!!) but what Jesus did for them. He purchased and washed the church with His blood, and He is the one who declares her righteous. Of course the church washed and purchased, has also been redeemed from slavery. But just like a bunch of convicts set free, we’ll soon make a mess of the good He’s made for us. Unaddressed sinful patterns don’t change overnight, despite the fact we’re no longer enslaved to them. Yet he will take the mess and make something good. Jesus takes greedy people and makes them generous. He moves sexually immoral people toward repentance and restoration. He takes skeptical folks and increases their faith. He did this in middle of this mess. There were bright spots too: evidence of Jesus work in the mess.

You can give up on the Bucs. But don’t give up on Jesus’ church, more specifically its manifestation in a local body of believers. Jesus didn’t, and he still doesn’t. It has always been a mess, but in Jesus eyes, it is a “hot mess” and we’ll eventually see what we’ll become. Until then, keep taking a sneak peak at Revelation 21 where the church comes down from heaven as a bride adorned for her husband. Hot, but no longer a mess.