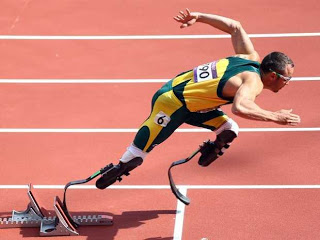 Perhaps the highlight of the Olympics last summer for me was the performance of the somewhat mythical “Blade Runner” Oscar Pestorius. A double amputee fitted with synthetic blades proved a tough opponent for the the first heat of the 400 meters. He didn’t make it to the finals but he made South Africans everywhere proud as he competed and beat two full-legged athletes. He made his fellow competitors proud as one winner exchanged numbers with him. The whole experience of watching this unfold made you simply proud to be a human. Animals don’t usually do this sort of thing.

We were mesmerized by what training, dedication and science/technology could accomplish. We saw a glimpse of what the Psalmist marveled at in Psalm 8.

Yet you have made him a little lower than the heavenly beings
and crowned him with glory and honor.
6 You have given him dominion over the works of your hands;
you have put all things under his feet,
7 all sheep and oxen,
and also the beasts of the field,
8 the birds of the heavens, and the fish of the sea,
whatever passes along the paths of the seas.

Dominion. Rule. Taking the chaos of amputated legs and bringing through the creation of prosthetics that grip the track just right. Honor and Glory. How people honored this man. How we cheered for him. What a success story.

Then last week he is arrested for murdering his girlfriend. From high to the lowest of lows, taking another life, robbing it of the dignity endowed by God. Removing the crown of glory and honor through anger and violence.

These verses are also true of Oscar. It is really true of all of us, though by God’s grace we don’t fully express our anger in such ways.

“None is righteous, no, not one;
11     no one understands;
no one seeks for God.
12 All have turned aside; together they have become worthless;
no one does good,
not even one.”

1.) People are always capable of doing this. I feel betrayed. How could the one who performed with such grace, and was shown grace by other athletes, display such malice? How could he display wrath instead of grace? Because that’s what sinful people are capable of doing, no matter how nice they appear. God’s common grace often keeps people from being doing what they are capable of doing. But this verse still reminds us that Pascal’s greatness and wretchedness principle is spot on.

2.)  We are all capable of doing this, so let’s deal with our anger NOW. I don’t know what anger issues Oscar had. I don’t know if folks called him “Oscar the Grouch” (probably Sesame Street wasn’t big in South Africa). But we do know he had issues and allegedly there were incidents. Maybe I have anger fresh on the brain since my sermon a week ago, but this is a good reminder of what we are all capable of doing. I’m sure most people who shoot their spouses/girlfriends probably would have at one time said, “I’d never do something like that.” I’m sure most people who love them would would likewise say, “He/she is not capable of doing such a thing.” Well since both beliefs have been proven wrong time and time again, why not change the belief? Why not consider that we are capable of great evil? Why not instead begin to deal with all anger now?

3.) Esteem the ordinary people around you. I admit I have elevated athletes, particularly Christian athletes before. Not all athletes will let you down like Oscar, but I would dare say many would do so, and do so quite often if we really knew them. Just like your normal relationships. But what if we began to esteem our normal friendships like we do our celebrities, heroes, athletes? What if we considered looking at them through the lens of Psalm 8? That God has crowned them with glory and honor. How might that transform our relationships? I’m pretty sure they’d appreciate it and I’m pretty sure that kind of thinking is consistent with Philippians 2:3 “….count others more important than yourselves…” 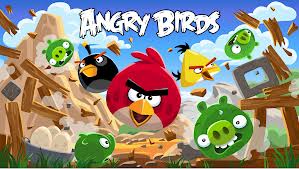 I recently preached a sermon on anger from the Sermon on the mount (Matt 5:21-26) called “Why are Angry Birds so Angry?” Afterwards I experienced great encouragement from the seriousness at which folks began to take their anger. Obviously I hoped, and preached to this end: that they would be motivated by the supreme demonstration of Jesus’ love, his taking their place at the judgment seat, council, and cross.

Several folks asked me some great questions. Here are some of my brief-but now expanded-thoughts and responses, as well as questions I would have asked myself (I know that sounds a bit weird, but just go with me there if you would).

I didn’t realize how much of an angry person I was. Should I stop using the word “Idiot?’

I loved her honesty. Now I reminded her that the main problem is anger in the heart. Jesus is reminding us that words can be used as weapons to harm people just as harboring anger in the heart can be used to make others pay. Next, “idiot” is not used here, but the Aramaic “raca,” (which has since fallen out of popularity). So whether you call someone a fool, idiot, dumba#$, or whatever, the heart issue is the same. Finding a replacement word is not the issue, but recognizing the need for a heart transplant. Fortunately we have that promise in Jeremiah 31.

I posited as one of the main causes of anger is that something we need or something we feel we deserve has been taken away from us. Then I proposed 4 possibilities for exactly what those idols could be: convenience, power, respect, opportunity. Identifying these idols and beginning to more deeply believe the gospel has been very helpful for me. I’ve a long way to go and I’ll actually never arrive until I’m safely in Jesus’ arms. But there is hope, forgiveness and love from Him the whole up-and-down journey.

In the interest of time, attention, and retention, I focused on these idols. However I feel that after talking with a few folks, I could have also further developed the self-righteousness angle. If you check out some angry responses from bible, you will see that self-righteousness leads to anger. So if we are regularly angry, that is an issue we need to explore.

The Older of the Prodigal Sons, becomes very angry when the Father celebrates and gives a robe to the Younger son. Nothing has been taken from him, but something has definitely been withheld. He feels he is owed something whereas the younger “unrighteous” brother shouldn’t be given anything. Much the opposite. Why? Because he claims, “All these years, I have served you and I’ve never received anything like this!” Self-righteousness is the root of his anger.

We see something similar in Jonah. Clearly there are forgiveness issues (the Assyrians were really ruthless), but Jonah is hoping only for punishment because these people deserve punishment. God shows mercy instead of judgment and Jonah gets angry.

Several people expressed to me some of their issues and what seemed to make them angry.

One lad indicated that he felt perfectionism might be behind his anger. He seemed to become most angry when people didn’t live up to his perfectionistic expectations. Another gal seemed to be most angry when driving, but it had nothing to do with others inconveniencing her. It had nothing to do with others disrespecting her. In fact she was angry because of safety issues.

The first guy will have to continually remember that he is actually quite an imperfect mess. He will also have to realize that others may not live up to his expectations, but that he ultimately doesn’t need them to do so.

The 2nd gal will have to recognize that her driving may not be as good as she thinks. Perhaps remembering times where God has graciously spared her an accident could help deal with her self-righteous driving record? Perhaps considering other areas she is weak in can help to deal with an over-all sense of self-righteousness, particularly when she gets behind the wheel.

No quick fixes, just community-involved journeys of repentance and faith.

I’m thankful to have had such honest conversations. In the words of Paul Tripp’s Instruments in the Hands of the Redeemer, “a person in need of change helping people in need of change.” And vice versa of course.