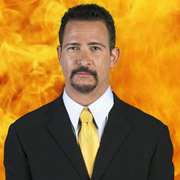 Its sad to say, but one of my most common inspirations for blogging, is Jim Rome. He has a Sports Talk show called “The Jungle,” broadcast from 12-3 pm (at least on the East Coast). He spends half the time talking sports, and the other half poking fun at sports or in social commentary.

But it’s not just an American issue. I spent 2 months in Mexico one summer and asked “Como Estas (how are you doing)” probably 986 times, and do you know the answer I got back 986 times? “Bien, y tu (Fine, and you..). “Bien” is what I said back. And honestly I’m grateful for their dishonest and terse response because I didn’t have the language skills to respond to anything but a ‘bien.’

But back to America (although its probably like this everywhere). Whether you disagree with the ‘ethicality’ of the attitude, it generally is true. When someone asks the question, “How’s it going,” the expected answer is a quick, “Fine.” But what about with YOU? When you say, “How’s it going,” do you really want an answer other than ‘fine?’ Or when someone asks you, “How are you doing,” do you really want to tell them how you are really doing? Do you have different responses for different people? Should you not ask how the other person is doing if you don’t really care to listen? Let me know what YOU think.