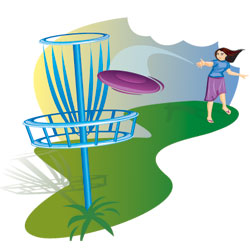 Last night for youth group (since only 3 youth actually came!), we decided to take a little ‘field trip’ to play disc golf. If you’ve never played this sport (I guess if golf is a sport, then this is as well), it inolves throwing discs which are similar to frisbee’s-0nly smaller and heavier-into a chained bucket on top of a small pole.

I resisted the trend for a while, but it really is a good time. Anyhow, the course where we play is often littered with big trees and branches that regularly knock down any disc which tries to pass through. Someone may throw a really good hard straight throw, and it might just barely nick a branch, and totally have its course redirected for the worse. Other times someone may throw the disc, which barely misses hitting 5-6 branches, and lands exactly where the thrower desired. Or it might hit a branch and actually have its course positively redirected.

No one is good enough to actually intend for the disc to do such things. And so when it does, we always say, “Its better to be lucky, than good.” Of course, by luck, we mean that God has providentially blessed the flight of the disc so that it lands in a commendable spot near the basket.

It’s hard to argue that it’s not better to be ‘lucky’ than good. Outside the disc golf course, we are so dependent upon God’s providential (that He powerfully preserves and governs all that comes to pass) involvement. Sometimes that can be comforting, and sometimes it can be humbling. We who are Christians are ‘lucky’ people because God promises to work all things for our good, which ultimately means making us more like Christ-which is a really good thing.

And when we succeed, we have to recognize that while God used our planning, gifts, skills, efforts, we are in the end ‘lucky,’ not ‘good.’ There are always many scenarios, often unseen or unrealized, that we end up passing through.