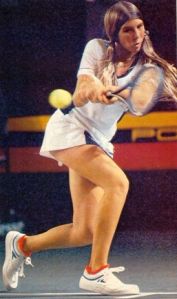 “I am incapable of being an extraordinary service to God without God. That’s what He likes to do. He’ll take an ordinary person and allow the them to do the miraculous.”

It has been a rather encouraging ‘sports week’ for me. I don’t mean that any of the teams I pull for actually won a game or two (the D-Rays haven’t won 2 games in their last 14). What I’m referring to is that I’ve been encouraged or challenged in my faith recently through the sports media.

This morning on ESPN, they ran a special on Andrea Jaeger. She was a tennis phenom (at one point ranked #2 in the world) from age 13-19 before being injured and unable to play any longer on the circuit. She later started a ranch for terminally ill children, and has involved people like David Robinson, Andre Agassi, Kevin Costner, and yes, even personal friend Cindi Crawford.

In fact Cindi Crawford even commented on her faith, explaining that “…she didn’t choose to become a nun: she was called.” Fairly recently, Jaeger felt called to become an Anglican Dominican nun.

Jaeger’s quote that is posted above testifies to a sovereign God at work in her own life. When people make leaps of faith, it is out of a faith that is first given by God. Now saying that God hasn’t given you faith is not an excuse to not step out in faith; however, when you do, you can be assured that it is His work. And when you see a quote like this, you are observing God given faith and humility.

To read more about Andrea Jaeger, particularly from another secular perspective (PEOPLE, although ESPN’s segment on her life was very God honoring), click here.