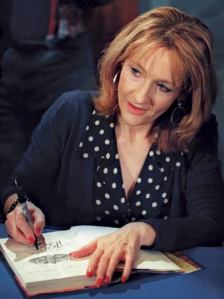 I must admit that I have never read any of the Harry Potter books or seen any of the movies. And I know that puts me into the 1 percentile category of people breathing on the planet. But I was watching the interview with JK Rowling on “Good Morning America” or “The Today Show” and was intrigued by this panel of young lads and lasses asking her questions about her novels.

Meredith Viera mentioned something to Rowling about several characters dying off in her books. And then she asked Rowling if she ever thought about killing off Harry. How she responded was very interesting and quite telling. She said something to the effect of, “I thought about it a bit, but realized how many people would be utterly devastated.”

And she’s right. How many folks would be utterly devastated if their young hero were to be ‘no more?’ What power this woman has! Money gives people power. But so do words. She has both so I guess that makes her the most powerful person in England.

Unfortunately we have just as much power, if not more, with the spoken word to ruin people’s days, weeks, and years. But the spoken word of encouragement can be just as powerful for good, even if it is just a few ‘pages’ of spoken words. So in some ways, without the luxury of a 700 page, billion dollar book, we’re just as powerful as Rowling. So let us take caution and be reminded of Spiderman’s maxim “with great privilege comes great responsibility.”