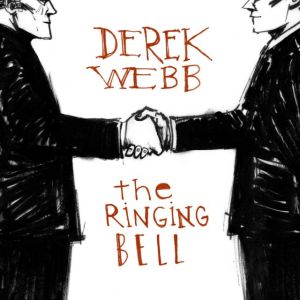 The other day, and when I say ‘the other day’, I can mean up to a year (however this was only a month ago) someone recommended to me Derek Webb’s album The Ringing Bell.

Derek Webb, formerly of Caedmon’s Call, has already put out several solo albums, and The Ringing Bell is his most recent.

I know I’m not a professional music reviewer, but I do have ears and I do have a little bit of taste. So I’ll tell you what I think of his new project (don’t I sound sophisticated saying ‘project?’). Anyhow, here’s my first review.

The sound varies from song to song, featuring acoustic numbers, as well as folk, and rock. What I really appreciate the most from Webb are his thought/emotion provoking lyrics. The lyrics however, will not win him approval from any positive-thought pimping preacher. Instead they can be quite dark and very heavy, dealing with the frustration of life this side of heaven.

Contextualizing Ecclesiastes 3 (you know, made famous by that Byrd’s song “Turn, Turn, Turn”) and Romans 8:18-25, Webb expresses the frustration of living in between two different worlds. The old has gone and the new has come (II Cor 5:17), but the world still awaits Jesus’ return to complete that newness. He sings:

There is a time for hunger and genocide, a time for babies to lose their lives.
And this too shall be made right.

Pretty heavy stuff. But he at least recognizes that “this too shall be made right.” There is an end in sight. Web beautifully weds these two truths (what we see now vs. what is not yet seen) which divorce both despair and an ignorant dishonesty from our hearts. It will do us well to see how much we need Jesus to complete his work in this world. Heck he might even use us somehow.

In another song, he challenges the notion of having a “savior on Capitol Hill.” The song is politically charged, but in such a way as we can listen. Webb’s voice is the prophetic voice calling us to think biblically, even before we think conservatively or liberally. He’s not a Dixie Chick who just hates the president. And so I do appreciate a dissenting voice who criticizes even himself. He also sings a confession:

I don’t even know the suffering outside my front door.
I join the oppressors of those I choose to ignore

The album is filled out by some love songs and a few other songs expressing honest frustrations and a deep need for Christ. Webb is really the voice of a modern day prophet, not one that predicts the future, but one who challenges the church to a deeper faithfulness to the gospel and covenant. That’s more of what OT prophets did anyway.

Overall, I highly recommend the album not just for the musical quality but for the lyrical richness. The music is pleasant to the ear and the lyrics inspire immediate, and sometimes challenging, reflection. Like everything, you can purchase it on Amazon.com

2 thoughts on “The Ringing Bell: Come and get it.”