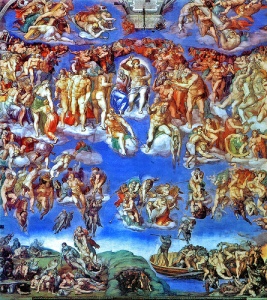 I DVR’d a hellish Dateline special about a month and a half ago, and finally got around to watching it last night. The subject matter was Hell.

Different people offered viewpoints, from a charismatic preacher, to a Oral Roberts grad turned liberal, to your friend and mine Marilyn Manson, to a torture victim. Manson believes hell and heaven are simply two ways of explaining the dual nature of man (good/bad). “Its that simple.” Some believed that we’ve created hell on Earth, while others emphasized that everyone goes to heaven.

They allowed everyone from Satanists to evangelicals to speak, and did a fine job representing each party. Here are two things I found worthy of a second look.

First of all, the narrator explained how the former Oral Roberts pentecostal mega-church preacher made his shift to universalism. First he began to see the bible as simply a book about God, written by men. Then came study in original languages, followed by the notion, “I just don’t see how a God of mercy could……” He still obviously believes in God, and so asked Him, “Am I doing the right thing in leading people down this path?” God gave him the green light. Of course, without the aid of scripture, God can ‘say’ a lot of crazy things, and justify a lot of stuff. But the special was beneficial in showing how his metamorphosis all began.

Secondly, a woman who had been tortured by some S. American government, expressed that her only hope in life was that the goodness of humanity would triumph over the evil of it. If humanity weren’t in essence good, then she would just give up now. There could then be no hope outside of this truth; it would have ‘destroyed her sweater’, pulling the proverbial thread as she walked away (hope you enjoyed the Weezer flashback).

Concentration camp survivor Ellie Wiesel expressed similar sentiments. Perhaps that was the agenda of the show? I’ve recently noticed through several mediums (sports talk, TV) a need for people to reestablish, or personally re-believe in the goodness of humanity. Although this is really anti-post modern, and I thought we were passed that.

Do you encounter people ‘pimping’ the goodness of humanity? Let me know. It is definitely a bridge to the gospel, but just a different one than I would expect to use. Maybe I shouldn’t expect.