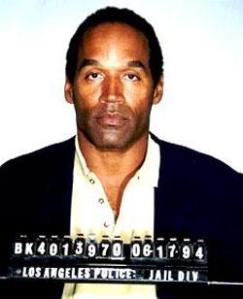 Well it looks like your friend and mine O.J. is in a bit of hot water again. Apparently he broke and entered in hopes of recapturing some stolen memorabilia. I don’t know if I’m supposed to say “allegedly” or not, because there is a tape with The Juice ordering and threatening some hapless fellow.

It is clear that OJ is not a model citizen, and periodically makes news for his not being ‘model.’ If every you ever think that the world is ‘fair,’ and all is as it should be, just take a look at The Juice. The man, with a documented temper and history of violence, was completely acquitted from the charges of double murder. He’s since proved that jury incompetent and his lawyers incredibly ‘brilliant.’

I wonder what it would be like to be the parents and family or friends of his victims. To have this man who killed your loved ones, walking around freely as though he were totally innocent? Can you imagine the difficulty of not living everyday in helpless anger? I would imagine it would be very difficult. I can only imagine.

Ultimately I know this world is still plagued with the nasty presence of sin. And until its done away with, we will see more from The Juice and others. But I have to believe that in the cross, Jesus is reconciling the world to Himself. I either believe that God has done/is doing/will do something about the evil in this world, or He could care less. Either I have the cross, or I have unbridled anger and frustration and despair. I’m not a family or friend of his victims and it still angers the heck out of me.

But even with the cross, we still “groan inwardly as we wait eagerly for the our adoption as sons, the redemption of our bodies” (Romans 8:23). At least I know I do. Groaning is hopeful; disillusionment is not. If we don’t groan, perhaps we need to draw more nearly to those who do. They are not hard to find.