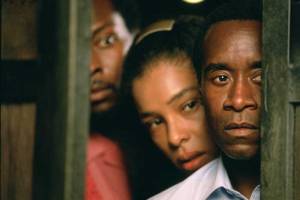 Particularly appropriate in the movie were scenes which revealed his reluctance to help (which made him seem more genuine, not flawless). Now this was at the beginning of the movie, and his heart obviously changed very quickly when a bunch of Tutsi refugees showed up in his living room!

But one of the excuses given to not help his neighbors was, “They’re not family.” Clearly there is an obligation in scripture to honor your father and mother, be gentle with your children, and to provide for them (one who doesn’t is worse than an unbeliever and has denied the faith-according to I Tim 5:8). Ouch. So I would admit there is a special primacy to the immediate family. But there is NOT an exclusion to those outside, is there? That’s often what happens.

Is there any explicit command or obligation to help those outside your own nuclear/atomic/whatever you call it these days family? Since many Americans (especially Christians-because this seems less heinous than drugs or sex) hold their family, or their children as their number one idol, I think this is an extremely appropriate question. An issue which I shall some day have to deal with as well.

In Deuteronomy 16, Moses gave specific instructions for families to invite aliens (outside covenant), fatherless and widows (outside family) to the Feast of Weeks. In the Parable of the Good Samaritan, the neighbor whom we are supposed to love becomes everyone-even enemies. And Jesus described those who obey his commands as his brothers and sisters (Matt 12:47-50).
Do you realize how offensive this would have sounded to his conservative Family First Jewish audience? Seriously offensive.

While your immediate family certainly takes priority (and I understand many have given themselves to jobs, ministry, hobbies first), those within the family of God take a close second, Even those outside the covenant, take a close third. Like it or not, in Christ, “We are fa-mi-ly!”and that obligates us to love, help, serve, and paddle the extra mile for each other. Thanks for reminding us Sister Sledge.