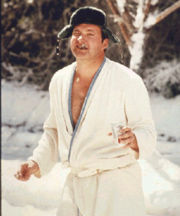 Last night I spent some time with my cousins, and Aunt/Uncle in Richmond. There were babies galore, some of them fairly fresh: 5-6 months or so. So it was extremely nice for them to ‘assemble’ with one day’s notice, and not play the ‘sick baby card.’ Flexibility is always a good thing, especially when its another’s flexibility that is tested!

I asked my Uncle and cousin-in-law about their church. Both greatly appreciated their pastor and his sermons. The sermons were brief enough to hold their attention, and included everyday mundane illustrations which parishioners could obviously identify (like a bug hanging onto a windshield wiper or his cat doing something ridiculous). But perhaps most astounding was my uncle and cousin-in-law’s ability to recount these illustrations to me, and explain the point behind them!
Illustrations are what people remember the longest. A truth/application that is wed to a good illustration is one of the greatest gifts a preacher can give to his people. In the words of Cousin Eddy from National Lampoon’s Christmas Vacation, “It’s the gift that keeps giving, the whole year round.”