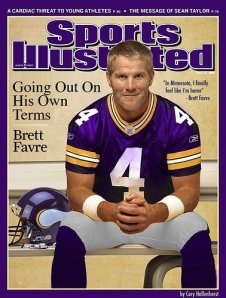 If you want an example of how NOT to make a decision, you need look no further than Brett Favre. He finally did decide not to come back and play for the Minnesota Vikings, and responded before the deadline of July 30th. However, as we’ve come to expect from Brett lo these many years, he could not bring himself to actually commit to staying retired. Concluding his decision to stay retired by throwing in a “Now come November 1st, I don’t know how I’ll feel if someone comes calling….” only fueled the ire of many.

In other words, if a team needs me, and is in a play-off race, and I don’t have to put in the hard work of training camp (and that does look miserable, I watched some practices), then I may be up for it. As long as it serves my best interest, as James Taylor sang “I’ll be there, Yes, I’ll be there, You’ve got a friend,” or a quarterback.

As much as I’ve come to lose any respect I had for Favre (never was a fan of him in Green Bay), I probably have to admit I have more in common, at least off the field, with him than I would like to think. You probably have a little Favre in you too.

Self-interest often collides against Kingdom commitment fairly regularly. However, He who considered others more important than himself surely offers us forgiveness and hope in this battle (Phil 2).