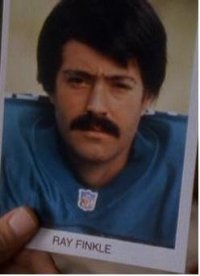 Last year the NY Giants won the Super Bowl courtesy of a timely play or two, and a timely mishap from the Patriots that could have ended the game. Some folks may not remember why they were able to play upon such a stage. But certainly not Kyle Williams will never forget: his two fumbles provided the Giants the needed opportunities to overtake the San Francisco 49ers.

People don’t necessarily recover from such mishaps. Think of Ray Finkle from Ace Ventura. Mishaps on such a big stage can almost define a person’s career. Think of Bill Buckner who let a routine grounder go through his legs. Think of Scott Norwood’s missed field goal in the Super Bowl (also against the Giants). Sometimes it’s not just careers defined by one or two mishaps, but entire identities.

Whether concerned about career or identity, two other famous fumblers (Earnest Byner and Roger Craig) took it upon themselves to go directly to Kyle Williams. Apparently the 49ers have been supportive, but supportive isn’t the only thing someone like this needs. I mean, the 49ers didn’t fumble the game away, Williams did. The 49ers didn’t deal with the personal feelings of worthlessness, experience personal threats, anger, and all of the other stuff that goes along with such a blunder. Only those who’ve had famous, or perhaps in-famous fumbles, can speak sympathetically to such famous fumblers.

Fumblers can also speak more authoritatively to fumblers than non-fumblers. They have the existential knowledge that other non-fumblers just don’t have.

Let me posit several lessons for the church:

3.) The church is full of people who have “blown it in a big game.” Maybe you’ve been a bad dad, bad parent, bad husband, bad kid, bad sport, bad _______. A pastor, parent, or friend can still speak authoritatively and point you to Christ and his forgiveness because God’s word is authoritative. But never underestimate the authority and influence of the existential/experiential perspective. Don’t let your mishaps (unfaithfulness, depression, anger, pornography, criminal record, background) drive you away from the church but toward Christ and other people. Fumblers listen best to other fumblers. I’ve fumbled games away and it hurts. I battle depression/anxiety and have dealt/still deal with different doubts. But I can speak more sympathetically and authoritatively now with people who struggle in those specific ways. In the end, I feel more than ever that fumbles can be incredibly redemptive, not only for myself but for my church community. I hope that will be the case with you too. We band of fumblers.