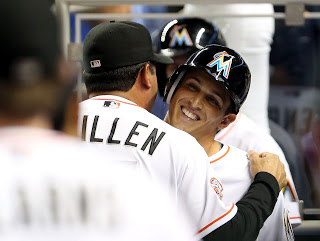 Every now and then you just come across a cool story in sports. In 2005, Adam Greenberg stepped up to the plate for the first time, and took the first pitch. Right to the back of the head. The first pitch was his last pitch, as he never earned his way back to the big leagues. Until last night. Check out the story here. Seriously, do yourself a favor and check this one out.

It would have been magical for him to have hit a home run off 20 game winner R.A. Dickey. But instead he struck out on three straight 80 mph knuckleballs. Like most of the Tampa Bay Rays he faced this summer.

But the ovation from the fans left him feeling as part of the ball club. So did the Marlins, from manager to the stars, from top to bottom. Several Marlins players invited him to come watch football during the week. He was part of the club. At least for a day.

The Jim Rome interview today shed a little more light on the story. Some big-wig and his wife were watching Field of Dreams (first time for the wife). “Moonlight Graham has nothing on Adam Greenberg,” said the husband. And thus the dream to get Adam Greenberg back up for one more plate appearance was born. Last night was the fruition of lots of hard work.

But it was hard work on someone else’s part. Greenberg admitted that he didn’t do anything to promote or get back onto the field. All he did was say, “Yes, I’d love to get at least one more at bat.” He received it.

The warm reception surprises me a bit. In a good way. A bunch of people who worked hard to get there, received this newbie like he was one of their own. They showed him grace and welcomed him as part of their community.

While I would have loved a home-run for Greenberg, he is thankful for the gracious opportunity to strike out. An obviously Jewish name (he also played for Israel’s national team), maybe this won’t be his last taste of grace? Maybe the veil will be lifted some day (II Cor 3:14-16)?