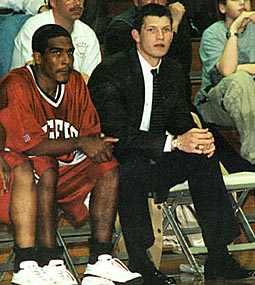 This past Saturday, I had the privilege of going to see one of my college buddies coach his basketball team (Hampden-Sydney College). It’s only an hour and a half drive from Richmond, so that makes it pretty easy to get up there, particularly when your brother-in-law is a Hampden Sydney alum.

Since my buddy Bubba didn’t have much time to talk after the game (he had to do a radio interview and scout the next game), he asked us to stay around a bit. So we came up to the upper box with him, to an area that said, “No fans beyond this point.” But if anyone were to say anything, I would have simply pointed to Bubba.
After the game, we were offered a meal ‘on the house’ at Applebees. But first we would have to wait for him to do some sort of ‘coachy’ type work in the sports/alumni office. Though I didn’t deserve to be there, since I was neither alumni nor ‘sports,’ I felt strangely comfortable. Even comfortable enough to put my feet up on a coffee table (although I did take the lead from my bro-in-law). Again, if anyone were to say anything to me, I would have simply pointed to Bubba.
Finally we went to Applebee’s where we were instructed to get anything we wanted (there were limits for players; but no limits for coaches). The food was good. Fellowship was good. We had a good time. And if anyone were to say that I didn’t belong, I would have one word for them: “Bubba”
My afternoon and evening with Bubba displayed a great freedom and access through the accomplishments of one person. I experienced opportunities, access to unique places, even a special meal with a dear friend (at the expense of Hampden-Sydney!).
It reminded me of the blessings Christ purchased for me. If Satan or anyone else tells me I don’t belong, I simply need to utter one word. As Martin Luther put it in his famous hymn A Mighty Fortress Is Our God, “One word shall fell him.” So for now we say bye to Bubba and hello to Christ.

2 thoughts on “Blessings through Bubba”