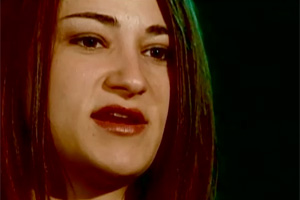 Last Friday night I was flipping through the channels. I love flipping. I can’t stay on one channel, especially during commercials. But this time it really paid off, as I came across a fascinating but quite sad interview on Larry King.

Jennifer Knapp, who I used to listen to while in college, (I even played her music while in a temporary makeshift band), just came out as a lesbian. She came out as a lesbian but professing Christian, though I really didn’t hear her actually use the name Jesus once. But maybe I just missed it.

The quality of her lyrics always astounded me as I had grown tired of lyrically bankrupt Christian music. And now she came out of the closet. The lyrics are still good, and I’ll still listen, but probably with some sadness now.

Things began to heat up as another evangelical pastor, who had blogged about her during the week, came on the scene to dialog and defend his views. I was thankful they got a mega-church pastor who had a head on his shoulders (I would have loved to see Tim Keller or John Piper though) and seemed truly motivated by love.

Then Ted Haggard, former mega-church pastor, who had to resign his pastorate because of his homosexual involvement, joined the party. Unfortunately he did nothing but muddy the waters of truth and just try to break down everything to “A Relationship with God. That’s what matters.” He glossed over Romans and completely missed the point. That made it even sadder and got me a bit riled up.

Anyhow, here are a few of my “takes” from the interview.

2. “This was not a choice.” This was more of Larry King’s take on homosexuality, though Knapp seemed to be OK with it. So in other words, if a feeling exists, then that’s who we really are. We should act on it. But such is the same reasoning for Sodomy, and for those who simply want to leave their spouses. If its a feeling, not a choice, you need to go for it. Probably a dangerous way to live.

There are a number of Christian resources out there who can help folks with same sex attraction, as well as a other sexual brokenness. One I highly recommend is Harvest USA.

3. Don’t elevate homosexuality. According to Paul in I Corinthians 6, neither the homosexual, nor slanderers, nor greedy, nor adulterers, nor swindlers will inherit the Kingdom of God….and such were some of you. Now I’m totally aware the difficulty of leaving a homosexual lifestyle behind, but let’s remember that we probably place more of a stigma on this particular sin and ignore other sins which the bible presents as equally as heinous.

4. Talking past. For the most part, the pastor and Jennifer Knapp seemed to be talking past each other. Jennifer claimed she wasn’t justifying her sin; the pastor continued to affirm she was. So if what she was doing WEREN’T a sin, then nothing really needed to be said.

I think the hardest part for a homosexual, or for most Americans for that matter, is that they’ve never seen someone who believes them to be wrong, yet still wants to be their close friend.

That’s just not many folks’ paradigm. Most haven’t seen someone who could disagree with their lifestyle, but still love them as a person, want to get to know them, and affirm their worth.
But if we’re never allowed to disagree and become friends with people who we don’t agree with, or we refuse to become friends with people we disagree with, the battle will just stalemate. And the scene from Larry King will just be a microcosm of Christian-Gay relations unless something changes. At least we have control over the latter.

3 thoughts on “Jennifer Knapp, Larry King, and THE King”